Amongst the most interesting and informative virtual exhibitions currently available is the exhibition of marine maps by Bibliothèque nationale de France. The wonderfully organised exhibition provides information on nautical maps, including an introduction to portulan charts, a guided tour, and links to the digitalised documents on Gallica, the library’s digital branch.

Portolan (or portulan) charts depicting the Mediterranean first appeared in the thirteenth century. Unlike the mappae mundi (medieval maps of the world), which were still being produced in this period, these were navigational maps, intended as aids for sea travel. The primary function of these charts was to provide sailing directions from port to port. The Cambridge Trinity College Library blog entry from 14 August 2015 provides a detailed explanation of portolan charts, illustrated with an example from their collections. A beautiful collection of portolan charts from the fifteenth and sixteenth centuries has been made available online by the Beinecke Rare Books & Manuscript Library at Yale University.

The accuracy of the portolan maps and their proximity to the Mercator projection have prompted increased discussion and debate on their origins and construction. See, for instance, H. C. Freiesleben, ‘The Still Undiscovered Origin of Portolan Charts’, The Journal of Navigation 36 (1983), 124-129; Joaquim Alves Gaspar, ‘Dead Reckoning and Magnetic Declination: Unveiling the Mystery of Portolan Charts’, e-Perimetron 3 (2008), 191-203; N. Roel, The Enigma of the Origin of Portolan Charts. A Geodetic Analysis of the Hypothesis of a Medieval Origin (Brill, 2016). 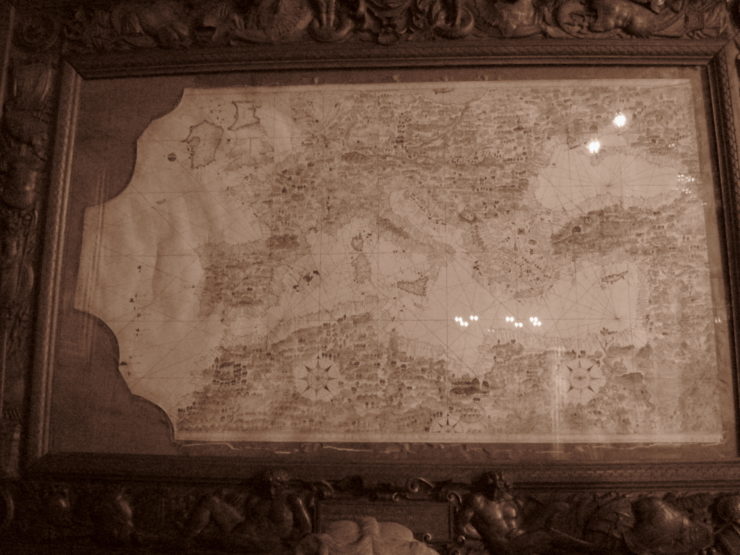