Honorius Augustodunensis and the Imago Mundi 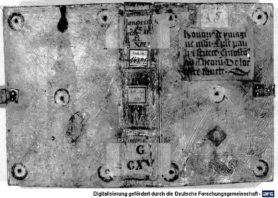 The Imago Mundi was written in the early to mid-twelfth century. This text became almost immediately extremely popular and was copied in hundreds of manuscripts before the end of the Middle Ages and the advent of printing (for incunabula of the Imago mundi, see here). Honorius Augustodunensis, the author of this text, was a very prolific author, leaving many encyclopaedic and theological works. However, very little is known for certain about his biography.

He appears to have lived the latter part of his life in the German town of Regensburg. The manuscript of Imago mundi pictured above was produced in Regensburg in the twelfth century, thus not long after the composition of the work.

Honorius was identified as the author of the work in the prologue, which took the form of letters (one to Honorius asking him to write about the world, and one from Honorius, replying that he has complied with the request and wrote the text following). The page of the Munich manuscript Clm 14731 (12th century) pictured below begins with the words: Incipit prologus Honorii de imagine mundi... ‘Begins the prologue of Honorius on the image of the world…’

The rest of the manuscript can be consulted here, at the Digitale Bibliothek of the Bayerische Staatsbibliothek.